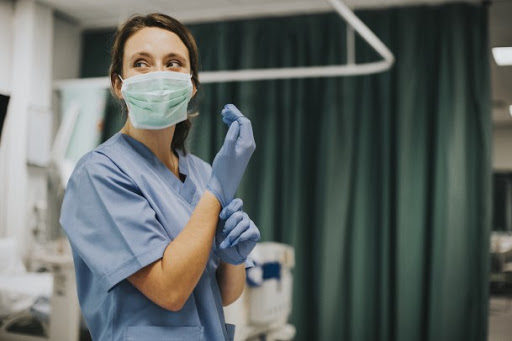 Ministry of Health guidelines released on Friday are causing considerable anxiety and stress for hospital midwives who feel they are putting themselves, the women they care for, and their families at unnecessary risk.

MERAS, the midwives’ union, says it is not the case that the unions agreed to the guidelines on PPE that were put out by the District Health Boards and Ministry of Health (MoH) as has been reported.

Industrial co-leader Jill Ovens has been part of a combined unions group engaging with the DHBs for several weeks over employment issues in relation to COVID-19 response in the health sector.

“We have made it very clear that MERAS members are by no means convinced that they are safe from transmission by women who are asymptomatic on presentation at the hospitals for maternity care,” Ovens says.

Their concerns have not been allayed by the latest news that 21 health care workers have been stood down after exposure to a West Coast patient who was initially misdiagnosed as having influenza and has now died as a result of COVID-19.

“Many midwives have young families. They fear taking COVID-19 home to their families. They don’t want to take this risk and as their employer, DHBs should not ask them to do so.

“Whether it is clinically indicated or not, the DHBs need to take a precautionary approach to protecting the health and safety of our health professionals and ensuring they feel safe when providing care at this challenging time, especially those who are most at risk.”

As a result of concerns raised by MERAS and other unions, MERAS Co-leader (Midwifery) Caroline Conroy has been asked to work with MoH Chief Nurse Margareth Broodkoorn and other union representatives on the issues of PPE and provision of appropriate uniforms and laundry services in the current pandemic.

Under the MoH guidelines, hospital midwives are only being provided with masks and other protective equipment such as gowns and protective glasses, with women who present at our hospitals who are symptomatic or have been screened as having been exposed to COVID-19.

“Our members are concerned that this misses the possibility of midwives being exposed to women who are not showing any symptoms, or whose symptoms are so mild they are not triggering an alert,” Conroy says.

She says midwives are particularly at increased risk for occupational exposure because of:

A recent research paper submitted to the American Journal of Obstetrics and Gynaecology detailed two cases of women who were asymptomatic on presentation to the same New York hospital and after the birth had to be admitted to ICU with severe complications relating to their later confirmed COVID-19 status.

The researchers said this limited initial US experience suggested a need for immediate changes in obstetric clinical practice. Importantly, the care of these women before their COVID-19 diagnosis involved exposures to multiple health care workers, all of whom lacked appropriate PPE.

Ovens says this is the case in New Zealand hospitals right now as no PPE is being supplied in this situation.

Five of seven confirmed COVID-19-positive women at the same New York hospital had normal temperatures on initial screening, and four did not at first report a cough. The researchers concluded that the minimal symptoms reported for some of these cases might have been insufficient to prompt COVID-19 testing.

The international data indicates that healthcare workers are a vulnerable population as it relates to viral transmission risk. This is undoubtedly due to their increased exposure to COVID-19 positive patients, both known and undiagnosed, as well as inadequate PPE supplies.

The researchers concluded that, given this risk, and without universal rapid viral testing, we must acknowledge that every admission for labour and delivery presents real risk for infection to our front-line healthcare workers, who in the New Zealand case are mainly midwives.

As such, the researchers concluded that ideal practice would involve universal PPE including N95 masks for all COVID-19 positive deliveries, as well as for those with unknown COVID-19 status until disease status can be determined through testing.

Ovens says that in New Zealand, hospital midwives are asking for surgical masks to be provided for all team members in inpatient, outpatient and community services, to be worn at all times, and for all women in maternity units to be given masks to wear.